Home    The Business    Freelance Statistics and Trends in Singapore: A Detailed Look

Freelance Statistics and Trends in Singapore: A Detailed Look

How many freelancers are there in Singapore? And which freelance jobs are most popular? In Singapore, the term “freelancer” generally refers to a person who earns an income by personally providing services to others on a project basis.

Freelancers run their own businesses instead of being employed by an organisation. They also commonly take on work from multiple clients at a time.

Given the perks of being a freelancer, such as being able to “be your own boss” and have greater control over your time and work hours, freelancing has been gaining popularity in Singapore over the past few years.

This is backed by our review of various studies on the freelancing industry in Singapore. And in this post, we’ll be sharing some of the freelancing statistics and trends that we’ve uncovered.

Read on to learn:

How Many Freelancers and Self-Employed Persons Are There in Singapore?

This includes the number of people who are engaged in “own account work”, or people who run their own businesses without engaging any staff such as freelancers.

And in the 2020 edition of the Comprehensive Labour Force Survey, it was reported that around 228,200 people regularly engaged in own account work between June 2019 and June 2020.

This was an increase from the figure of 211,000 in the 2019 edition of the same survey. It also represented an increase in own account workers from 8.8% of the resident workforce to 9.7%.

Self-employed persons include not just own account workers, but also those who hire employees to help run the businesses that they’ve started.

As stated in the MOM’s Comprehensive Labour Force Survey 2020, the percentage of self-employed persons in Singapore increased from 13.5% of the resident workforce in June 2019 to 14.7% in June 2020.

The Comprehensive Labour Force Survey 2020 by the MOM also shared that the percentage of self-employed persons who held more than one job increased to 6.7% in 2020, compared to 6% in 2019.

Do Freelancers in Singapore Freelance By Choice?

According to the Comprehensive Labour Force Survey 2020 by the MOM, 190,800 or 84% of own account workers in Singapore engaged in such work by choice in 2020.

The reason for this was because such workers:

“enjoyed the flexibility and freedom associated with own account work”. What are the Demographics of Freelancers in Singapore?

However, there was a decrease in the number of primary own account workers aged between 30 to 59.

57% of primary own workers in Singapore in 2020 had non-tertiary qualifications (i.e. post-secondary education) or higher, and this was a slight increase from 54% in 2019. What Freelance Services are Most Popular in Singapore?

In 2020, the most common occupation among primary own account workers in Singapore was private-hire car drivers on online matching platforms, according to the MOM’s Comprehensive Labour Force Survey 2020.

Other popular occupations were (as ranked in decreasing order of popularity): A 2017 study by PayPal found that among the freelancers who get jobs from online platforms, 21% of them provided data entry and research services. Other popular services included:

How Do Freelancers in Singapore Market Themselves?

The MOM’s Comprehensive Labour Force Survey 2020 shares that popular channels used by own account workers to market themselves in 2020 include:

Impacts of the COVID-19 Pandemic on Singapore Freelancers

The Comprehensive Labour Force Survey 2020 by the MOM also asked respondents about the challenges they faced due to the COVID-19 pandemic in Singapore in 2020.

The survey revealed that 52%, or about one in two, regular own account workers experienced work challenges in 2020, compared to just 35% in 2019.

90% of those who reported facing such challenges believed that the COVID-19 pandemic had only exacerbated their situation. How did freelancers in Singapore cope with COVID-19-related challenges?

As stated in the Comprehensive Labour Force Survey 2020 by the MOM, 37% of regular own account workers opted to put in more hours to overcome the challenges faced as a result of the COVID-19 pandemic.

34% of them decided to postpone big-ticket purchases, while 20% took up multiple jobs.

Only 12% resorted to employee work. A constantly updated list of all measures the Singapore government is taking to help freelancers and self-employed persons tide through the coronavirus pandemic.

In 2017, the National Arts Council released the findings of its Arts and Culture Employment Study (ACES) 2017, which included data on arts freelancers in Singapore.

According to the study, 47% of arts workers surveyed were freelancers, with this figure being higher than the national proportion of freelancers in Singapore at that time (14%).

Compared to full-time and part-time arts workers however, arts freelancers reported being less likely to:

The following are some highlights of a 2018 Media Freelancer Study conducted by the Infocomm Media Development Authority (IMDA), which included responses from:

The study estimated that there were around 4,000 full-time media freelancers in Singapore in 2017, with 66% of such freelancers working in non-media sectors.

In this regard, the Wholesale & Retail sub-sector was the largest non-media sector hirer of media freelancers.

On the other hand, the Film & Video sub-sector was the largest hirer of media freelancers for the media sector.

Among the media freelancers surveyed for the study, 59% of them were male and 88% of them had obtained tertiary qualifications.

Of the media and non-media companies surveyed, 90% of them believed that it was important for media freelancers to have media-related work experience instead of just having media-related qualifications. 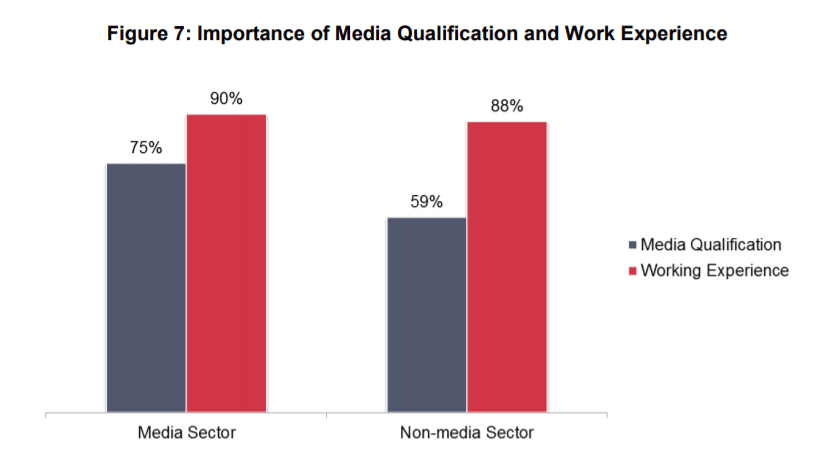 On the issue of getting clients, media freelancers preferred to get jobs from “channels that guaranteed high degree of trust”, such as via referrals or their personal networks.

Apart from these channels, Freelance.com, Freelancer.sg and Upwork were the top three freelance platforms that media freelancers preferred to get work from.

The top five roles that media freelancers were hired for were:

The media freelancers surveyed also sought more support for issues such as:

There appears to be contradicting findings on the issue of media freelancers signing contracts.

ContentGrow has released a study titled “The State of APAC’s Freelance Writer Economy 2021,” where they surveyed 1,200 freelance writers and journalists from the Asia-Pacific region (including Singapore).

According to the study, freelance writers from Singapore have the most expensive rate compared to other freelancers from the Asia-Pacific region, charging US$100 to US$300 for a 500-word piece of written content. In terms of the languages they operate in for client service, the majority (72%) of the participants from Singapore said they use only English, while the remaining 28% shared that they use two or more languages. Separately, the niches that freelance writers in Singapore preferred to work in were:

As stated in the Comprehensive Labour Force Survey 2020 by the MOM, 34% of resident regular primary own account workers in Singapore in 2020 were private-hire car drivers, making it the top occupation among such individuals at that time.

Of these private-hire car drivers, 70% were non-tertiary educated and 57% were aged 50 or older.

Private-hire car drivers also reported putting in more hours at work in 2020, possibly due to the effects of the COVID-19 pandemic on ridership.

Based on an honours thesis by Teo Yi Ning submitted to the National University of Singapore in academic year 2019/2020, private-hire drivers in Singapore can be categorised into at least three groups of workers:

Based on a 2020 study by the Centre for Work & Learning of the Institute for Adult Learning Singapore, 30% of adult educators surveyed were freelancers—whom the study defined to be:

“individuals in a part-time position, or contracted as a freelancer with training as their primary role”

86% of them also had at least one training qualification, compared to 81% of the full-time adult educators.

Freelance adult educators were found to earn “slightly more” compared to the national average of freelance professionals in sectors such as fashion, advertising and marketing and visual arts. They also enjoyed better work prospects and higher job security.

However, the study found that freelance adult educators faced less decision-making autonomy at work, and also tended to have poorer pay, career prospects and job security, compared to their full-time counterparts.

The researchers concluded that people in Singapore’s training and adult education sector started off as freelancers before transiting to full-time employment. This is based on how there were:

When asked why they decided to become freelance adult educators, respondents cited reasons such as:

The top five challenges cited by freelance adult educators in their line of work were:

Takeaways from the Freelance Statistics and Trends in Singapore

As seen from the data, freelancing is gaining popularity in Singapore—especially among those who choose to freelance by choice.

From arts, media, writing, training and adult education or even private hire, freelancers have a wide range of sectors that they can ply their trade in.

However, the life of a freelancer isn’t the easiest.

There is competition from fellow freelancers to fend off (especially since more are becoming freelancers).

Freelancers also have to contend with finding enough work to support themselves and saving enough for retirement.

The ongoing COVID-19 pandemic has also caused the rice bowls of many freelancers to take a hit.

If you’re thinking of becoming a freelancer in Singapore, keep in mind that it won’t be an easy road ahead.

Make plans to equip yourself with the right skills and expertise before you take the plunge into the challenging but exciting world of freelancing. Good luck!